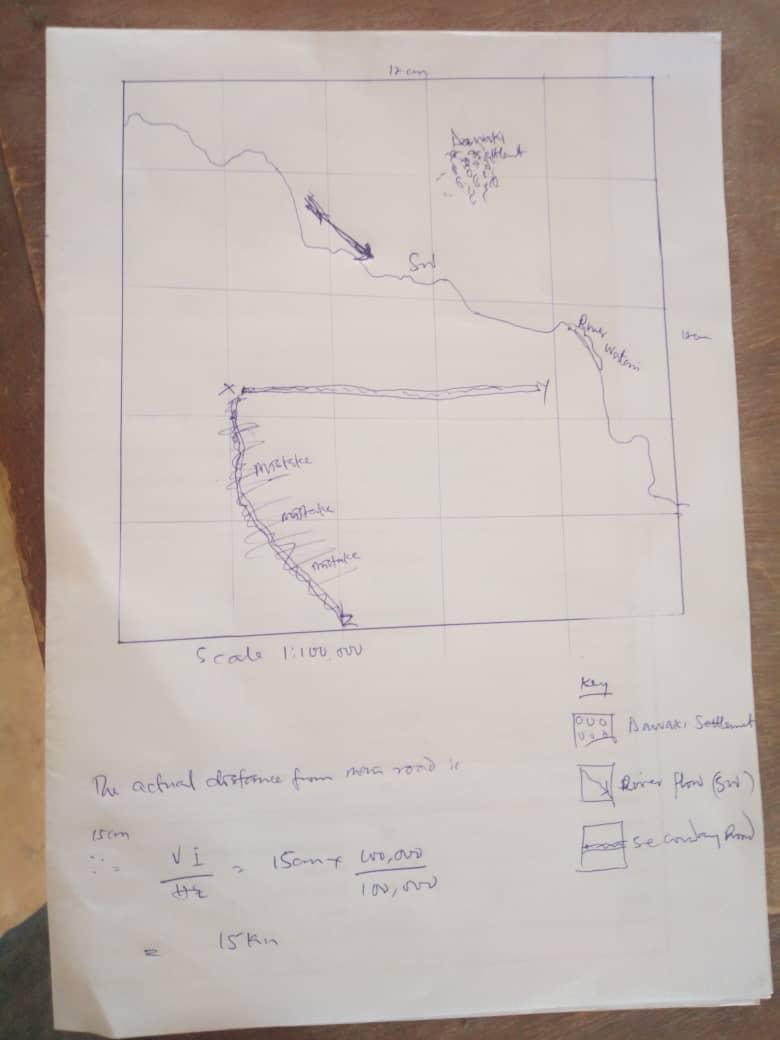 (1bii)
(i)Relief; the land is on a breakdown. It is suitable for human settlement and establishment of many others social cultural features like schools , market, roads etc.

(ii)Drainage; this refer to water bodies like river and lakes. They can either get water by government water protects or boreholes sunk by individual

ANSWER QUESTION ONE AND ANY OTHER THREE QUESTIONS

Then answer any 3 other questions

(3aii)
Organically Formed Sedimentary Rocks: These are rocks which are formed from the remains of plants and animals. Some of the notable rocks formed by the remains of animals are chalk and corals. Those that result from plants include peat and lignite.

(3aiii)
Chemically Formed Sedimentary Rocks: These are rocks which results from chemical composition. The major rocks formed include Borax, gypsium.

(4a)
Temperature and precipitation

-DEMERITS-
(i) It’s more descriptive and generalized with ignoring local and causative factors.
(ii) It neglected air masses
(iii) It is empirical and, therefore, is based on facts and observations

(7a)
The ozone layer is a natural layer of gas in the upper atmosphere that protects humans and other living things from harmful ultraviolet (UV) radiation from the sun.

(7bii)
Protection from harmful ultra violet rays and radiation: The ozone layer protects us from harmful UV rays that can have serious effects on biodiversity, animals and people’s health, including skin cancer and eye cataract.

(7biii)
Absorption of pollutants: The stratospheric layer which occupy the lower part of the atmosphere removes the unwanted pollutants from the earth’s surface.

(8a)
Geographical data refers to data and information that has explicit or implicit association with a location relative to Earth.

(8bi)
Vector data file: These data are created by digitizing the base data. They store information in x, y coordinates. Vectors models are used to store data, which have discrete boundaries like country borders, land parcels and roads. Vector models are useful for storing data that has discrete boundaries, such as country borders, land parcels, and streets.

(8biii)
Geographic database: Geographic databases can store more complex elements needed to describe the world and the roads or buildings built upon it. The basic data element is the point that is the combination of the longitude, latitude, and sometimes the altitude.

(8biv)
Multi temporal data; These are data generally used for change detection. It attaches a time component to information ATTENTION :- IF YOU WANT US TO HELP YOU SEND ANSWER FOR THIS EXAM YOU ARE WRITING, YOU MUST PAY NOT FREE

Direct SMS MEANS all answers(theory & obj) will come direct to ur phone as sMs.

Whatsapp MEANS The answer will be sent to you on WhatsApp after we confirm your subscription. Add Us In WhatsApp With 08023429251

NOTE:- All SMS Sent To The Above Number Are Attended To, Our Phone Number Might Be Diverted To Avoid Distraction. Always Send Us SMS Of Your Complaint Even When Our Number Is Not Available, Your Message(s) Will Get To Us And We Will Reply You ASAP.

Hi there! Click one of our representatives below and we will get back to you as soon as possible.